A TRIBUTE TO GORDON DAVISON By lifelong friend and business partner, Peter Lockey

A TRIBUTE TO GORDON DAVISON

Lisa and I were talking to Gordon in our garden but “keeping our distance” due to Covd19. He had been for a bike ride on his ebike. Three days later, we were stunned to learn from his partner, Daphne, that he had become ill and had been taken to Cramlington A & E hospital. We were shocked to hear that he had suffered a heart attack

Gordon and I first met at the Panama Swimming Club in Whitley Bay in 1955 and found that we had many interests in common. We were both passionate about rock climbing, locally at Crag Lough on the Roman Wall and the Wannies near Kirkwhelpington, and then the Lake District. This was the start of our climbing, skiing and mountaineering partnership.

Gordon’s background was from an apprenticeship at C.A.Parsons Engineering in Newcastle followed by an engineering Bsc at Newcastle University. My background, after Whitley Bay Grammar School, was in sales and marketing. I also had a Mountaineering Association rock climbing Guides certificate and a BAPSI (British association of Professional Ski Instructors) certificate.

Both of us were ambitious to be self employed and independent. We would spend hours discussing just how we would achieve this. It eventually dawned on us that with our joint interests and experience, and with a dearth of specialist outdoor shops in the North East at that time, setting up a shop seemed like a good idea and timely. LD Mountain Centre was born on Dean Street, Newcastle, in April 1966. We both continued with our day jobs until it proved to be successful with increasing sales and reputation. It still exists today, run by Gordon’s son Pete and partner Roddy.

Two years later, after several visits to the Alps, Dolomites and Italy, we felt that there was a big opportunity for someone to make a success of distributing SCARPA boots which we had been

importing and retailing. After a visit to Scarpa’s factory, still run by the Parisotto family of Sandro, Davide, Christina and Piero in Asolo, Italy, we agreed to become the UK distributor. This turned out to become successful and today, most outdoor shops in the UK still stock the Scarpa range.

At the same time, we believed that there was a good market for a new line of rucsacs and outdoor clothing, made here in the North East. We decided to name the manufacturing company BERGHAUS. Berg haus translates into mountain house which gives continuity to LD Mountain Centre, and also has a good mountain/outdoor connotation. We started manufacturing in the premises above the shop, making cagoules and small rucsacs. One of our first part time employees was Roger Uttley who went on to become captain of England rugby team. At 6’4” tall with a long

‘reach’, he could reach and manipulate all the cut parts on the cutting table.

The BERGHAUS brand became successful over the next few years, exporting to Europe, Australia  and the USA, becoming known for its quality and innovative designs, necessitating a move to much bigger premises at Washington. Sponsorships with famous climbers such as Sir Chris Bonington, Alan Hinkes OBE, Alan Rouse, Brian Hall and Paul Ross, all helped its reputation.

This seemed to be the appropriate time to persuade Tony Sharp to join the Company as Sales and Marketing Director. He was a close friend and a very experienced skier. Before LD Mountain Centre had opened in 1966, Tony and I had run a ski school in the Cheviot and Pennine areas which brought good business to the shop.

One of the most important departments in the company was named the ‘Design Room’ where a small group worked on new products and improvements to existing products under Gordon’s eclectic leadership. From Charlie, a PHD specialising in materials and fabrics, to Marion Barnes, an

expert in pattern cutting, the team’s main purpose was designing prototypes ready for rigorous testing, whether it was rucsacs for high mountain use, waterproof and windproof clothing for all weathers, or rugged gaiters to fasten over boots for difficult terrain (military in the Falklands), the prototypes were then subjected to rigorous outdoor testing in mountain conditions. Berghaus was also the leader in launching Gore-Tex into the outdoor market.

For many years Gordon and I had got into a regular routine on a Wednesday afternoon and evening going out into the hills, usually Cheviot or the Lake District, with the latest prototype designs of rucsacs and outdoor clothing, subjecting the gear to extreme tests, in an effort to highlight leakages, tears and durability. We would also carry out the same testing over several days on Scottish Munros, Alpine ascents, high level routes with skis and climbing gear. We would return to the Design Room with our test results so that any problems were ironed out and products were improved ready for new rounds of testing.

Not only did this regime keep us very fit, but being together for long periods in the mountains, gave us time for deep discussions about finance, marketing, manufacturing and new ideas and innovation. Gordon and I were quite different personalities, but it was the respect and trust that we had for each other over more than 60 years that made our unique friendship and business partnership.

At its peak, the Berghaus factory and warehouse premises in Washington employed over 600 people. During the Falklands war, the factory was running a dayshift and a nightshift to cope with urgent orders for rucsacs and Yeti gaiters for our armed forces, including the SAS and the SBS groups.

In 1988 we received a Queen’s Award for Export. At that time, our main export markets were Germany, Italy, France, Netherlands, Denmark, Norway, Spain, Australia and the USA.

Recently retired from Berghaus, Louise Shennan was appointed as PA in the early days of the company and retained that position even after Pentland took over. She claims that she is the longest serving employee of the company! She is right and she was longer serving than both Gordon and me.

Berghaus was bought by Pentland in 1993, allowing the company to pursue further growth and invest in the talented workforce, many of whom had grown with the brand since the early days of the business. It also allowed Gordon and I to enjoy successful other lives in retirement.

Gordon was married to Judith in 1968. The marriage produced two children, Pete and Susie, and Gordon couldn’t have been more proud of them and their children (his grandchildren, Beccy, Henry, Hugo and Tom), and Pete’s children Dougie and Leo. Gordon’s marriage to Judith ended and they both went on to find new partners. Gordon and Judith remained close friends.

At age 60 he became a ‘couple’ with Daphne Manson, a long-time friend and one of LD Mountain Centre’s earliest customers. Daphne’s husband Neil also a great friend of Gordon’s and a much loved and revered consultant ophthalmologist at Newcastle RVI, who had died a few years before.  Daphne introduced Gordon to sailing and this, together with his wind surfing interest, led to a very long and happy 25 years.

They sailed around the western Isles of Scotland, went on to sail around Italy, Sicily and many of the Mediterranean islands. After travelling around much of Italy, they then decided to buy and restore a derelict farmhouse and olive grove and become Italian citizens (Gordon only). The next few years were spent renovating the house, adding a swimming pool and working on the olive grove which supplied family and friends with first class olive oil for a few years. They made some very good friends there, including Phyllis and Joan who are still in touch.

Daphne and Gordon returned to the UK about eight years later to be closer to family and friends, buying and renovating a lovely house and garden in Kyloe near Belford in North Northumberland. From there, the next move was to a wonderful old terrace in Market Square, Corbridge, which again, using their magic touch and energy, they transformed into a modern home with character. The last move was to a small but perfectly formed house, which they turned into their final home together. Daphne’s green fingers made the small garden space into a Mediterranean style courtyard.

When Lisa and I moved to Corbridge, nearly seven years ago, we bought a house and annexe which required more building work and renovation than we had foreseen. Daphne and Gordon encouraged us and helped us to move and settle in this delightful village.

We all shared a liking for Leonard Cohen. In one of his most famous songs, he wrote: “So long Marianne, it’s time that we began / to laugh and cry and cry and laugh about it all again”.

We will miss you terribly. We thought you were indestructible. Your death leaves a great hole in our lives. Lisa and I will learn to live with it until our own time is up.

So long Gordon. Your absence will be felt and you will be remembered.

Email from my elder son Pete Lockey in Surrey:

“I have known Gordon all my life and have so many great memories of him: On holiday on the coast of Spain as a very small kid, Gordon driving a speedboat, which we excitedly bundled into. As a slightly older kid, holidaying in the Lake District one summer in a rented house, with Gordon and my dad breaking in by climbing up the outside wall, having lost the front door key. Slogging up Cheviot in the snow, with Gordon wearing a new prototype jacket he had designed, and carrying the engine for a homemade ski tow on his back.

“When I started working in academia, I always felt that Gordon was on a similar wavelength when I talked about it – he really understood the value of analysing a problem and thinking through creative solutions. Even in recent years, whenever we arrived wearing new outdoor kit, Gordon would still be enthusiastically looking over its features, and finding out our opinions on its performance. I will miss his enthusiasm, his energy, his interest in others, and hearing the latest on the projects that he always had on the go.”

Email from my younger son Paul Lockey in Hampi, India:

“Sorry to hear that news. He almost seemed like a relative to me since I was young and his character was always a great light of honesty in all his expressions. Never hiding what he really thought about things. I respected him greatly. Very sad.

“What I saw as the really special elements of Gordon’s character was his inventiveness and ingenuity which along with the testing days with my dad resulted in constantly evolving new ideas and designs for gaiters, rucsacs, boots and waterproof garments. He was so honest in his viewpoints, be it climate change or what he thought of the people running the country. That’s what I will remember.” 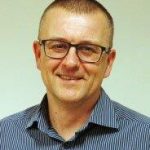 The Forestry Commission are an active provider of multiple outdoor recreation projects to increase community participation in outdoor activity – from mountain bike trail centres to guided trail runs, from competitive adventure races to the family Gruffalo trails – we are certain much of our work contributes to the OIA’s mission to ‘Get Britain Active Outdoors’ . The OIA provides great opportunities for us to meet industry colleagues and learn from others. This is why we are members of the OIA, attend the OIA conferences and seminars, and enjoy working together on research and participation development.